Today was very hot too. And misty and humid. Because of the intense heat, some of the days feel a bit blurry. I notice that it affects my mental awareness a bit, and because I sometimes am forced to walk along trafficked roads, I listen to audio books just to ‘get away from it all’ for a while. 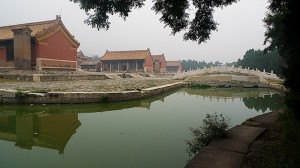 The highlight of the day was the visit to the Eastern Qing Dynasty Tombs. These tombs are amongst the largest and best preserved tombs in China. They are devoted to the rulers of the last feudal empire in China – the Qing Dynasty from 1644 to 1911. I am walking the Ming Dynasty Great Wall which is the Dynasty that preceded the Qing Dynasty. The Qing Dynasty was followed by the Republic of China.

5 emperors, 15 empresses, princes, princesses and a large number of concubines were buried here. The tombs take up an area of about 80 square kilometres. The layout of the tombs and surrounding park areas were very nice and gave associations to the Forbidden City. Some of the buildings were in need of repair, but that added to the feeling of age gone by. I got some good photo opportunities although it was a foggy day. One of the tombs had absolutely no visitors, and the feeling was a little bit eerie.

I walked on for a little while, and then found a spot to rest under some trees. Very hot, humid and no wind. I was not going to walk the hottest couple of hours of the day. I followed small roads and dirt roads close to the remains of the Great Wall. My goal for the day was Daankou which lies in a pass by the Great Wall. Da an kou translates to Big peace pass.

It got dark before I got there. Less than a kilometre from the village, I heard several barking dogs and hoped they were chained up. They were not. Two dogs appeared out of the dark on each side of me. One of them kept a little distance, but the one on my left hand side got too close for comfort, so I gave it a good old whack with the point of my walking stick. Don’t like doing this, but in the dark I was not taking any chances. It yelped, and kept its distance after that.

As I entered the village, I asked people if there were any small guest houses I could stay at. Everybody shook their heads. They I saw a small pharmacy and thought I might as well get some more plasters for my feet. In the heat, and with the fairly long distances, I have started getting blisters again. After buying the plasters, I asked the owners of the place about a guesthouse, but they too said there were none. They were very kind and asked me to sit down while they made some phone calls to look at the possibilities. Perhaps they saw that I was shattered.

After some phone calls, they very kindly offered me to stay on their bed. I was relieved. I had my tent with me, but sleeping in it in this intense heat would be just as much torture as walking long distances during the day.

Most houses in the area have devices on the roofs for using solar power to heat water during the day, and showers connected to these. It felt quite exotic to take a shower at night outdoors with a candle light! When I was finished, I got to eat a very nice supper with the couple.

My hosts were Wang Hao Zhen and Duan Cai Yan. They set up their pharmacy in Daankou four years ago. They had a nine year old child who lived with their parents about an hours drive away. In the evening we sat talking, and as they had a computer and internet we used the Google translator whenever we were stuck for words in either direction. Thank you very much for being so kind to a tired and dirty traveller!!!

One thought on “Visiting the Eastern Qing Dynasty Tombs”

There are no failures – just experiences and your reactions to them.