Today started with a visit to Huang Ya Guan Great Wall (Yellow cliff pass). This section of the Great Wall gets it’s name from the yellow colour of the rocks surrounding the pass. It has been commercialized, and tourists can walk west or east from the pass. I decided to walk westwards. It was a very misty and humid day, so unfortunately not good at all for taking pictures which had been part of my plan. The walk was hard, and as it got hotter and hotter, I noticed how my body was working harder and harder to keep me cool. When the temperature is in the mid 30’s centigrade and it is very humid and no wind, the body really doesn’t have that much leverage to cool itself down.

When I got close to the top, I sat down to rest and cool down. The Huang Ya Guan Great Wall was first built by the Northern Qi Dynasty (550-557) as was the case at Gubeikou. It too was strengthened by brickwork and watchtowers more than 800 years later during the Ming Dynasty period. In the mid eighties it was rebuilt so that the brickwork today appears to be ‘perfect’ as opposed to the Gubeikou stretch which is original. 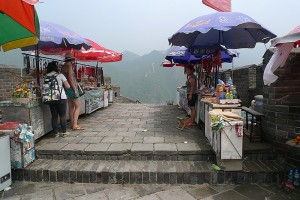 On my descent, I ran into two foreigners. Alba from Spain and Anja from Poland. They were sitting resting in a watchtower, and it wasn’t hard to join them as it was very hot. They were both here as summer students learning Chinese in Tianjin. They were both of the chatty type, and I was introduced in to the world of eternal studentship with the aim of always searching for the next scholarship so that one could go on studying. When we got to the bottom, we had a drink and ate together. It was good to speak English again.

Walking the Great Wall any further than the rebuilt sections is very dangerous here, so I went south, and continued my walk on small roads and dirtroads eastwards. At one place I needed to find a way from one small road to another – about a kilometre through an area that was partly agricultural, but also fairly steep. It started well, but after half way I hit a dead end, and spent a lot of time looking for a path to get on. It might sound strange that I didn’t just go bushing through the forest the last 500 metres, but the forests are very dense here, and in steep terrain it becomes extremely time consuming, so it is usually best to save time by looking for paths. The problem with paths at this time of year is that they are hidden by the foliage. After having looked around for a while I luckily met a local guy who took the time to walk with me for a few minutes and showed me a barely visible path running the right way. Many thanks to that man!

Having spent half the day at Huang Ya Guan, the distance wasn’t too long today.