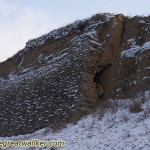 Here you can clearly see a layer of bricks on the outside of the rammed earth wall. 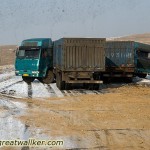 The two lorries managed to avoid a serious crash. After snowfall there are a lot of accidents on the roads. 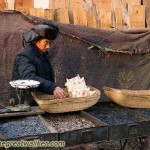 This guy had an impressive assortment of sunflower seeds for sale. 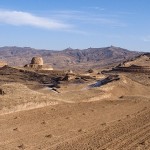 I followed the Great Wall for as far as the eye can reach, and further. You can see it's path along the ridge to the left. 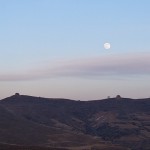 Great Wall and rising moon. This was a very cold night. 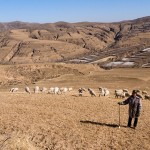 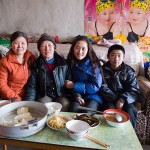 Three generations of a family in Inner Mongolia. They were very nice and offered me to share a hot meal with them. 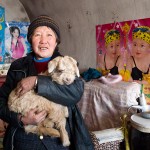 This goat was only a week old, and too weak to be out with the herd in the cold conditions. 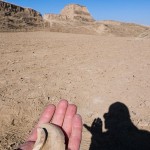 I see a lot of pottery in the fields while walking the Great Wall. 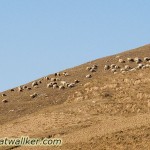 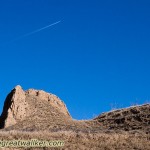 While walking the Great Wall northwards I hit on a air corridor trafficked by planes. 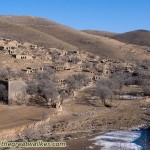 A large watchtower infront of a deserted village. 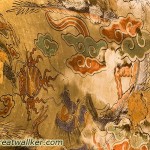 Roof decoration in the deserted village. 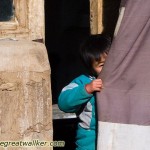 This girl was playing extra shy. She lived in the countryside with her grandparents. Her own parents worked in a large town, as is the case for many Chinese children. 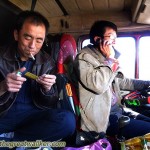 These lorry drivers gave me a 3 km ride to drop me off at the Great Wall. The guy to the left is reading a small card that presents this walk in Chinese. 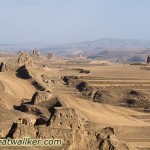 Beautiful Great Wall as far as the eye can see. 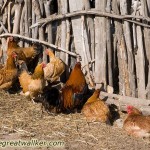 It was cold, and a strong wind from Inner Mongolia made things colder. These hens were huddling together in the sun against the fence. 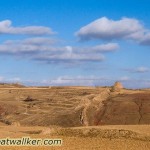 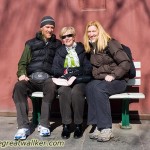 My mother, sister and I sitting in the sun outside the Forbidden City in Beijing. Thank you both very much for the visit! 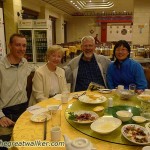 My mother, Kelly and his wife Pingping, and I. Kelly and Pingping have been my safe harbour in Beijing. Thank you very much! 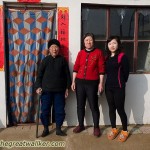 Grandmother, mother and daughter aged 75, 53 and 25. The Grandmother had bound feet. 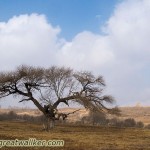 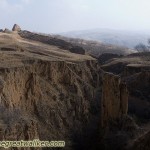 Although some of the cracks from earth erosion are only a few metres wide, they are still very time consuming to get around. 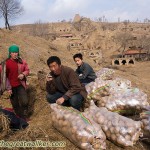 Farmers retrieving potatoes from a storage cave under the Great Wall. The woman kindly asked if I wanted to eat with them, but it was still early in the day, so I needed to push on. 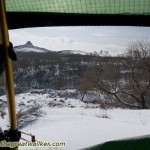 When I went to sleep, there was no snow. This was the view two days later. 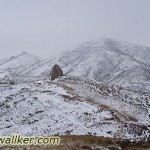 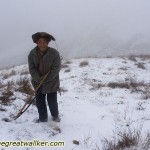 A shepherd trying to keep warm. They are always shaking there head when they see how little clothing I use. As long as I walk, I stay nice and warm. They on the other hand are usually standing still. 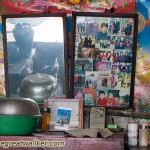 The wall of a woman that gave me some boiling water for a noodles meal. As is usual, the younger generation has moved to the closest city where they have found work. 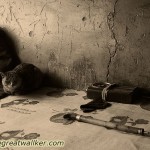 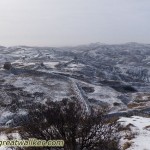