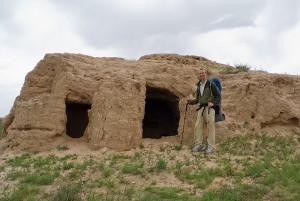 Quick report as I am staying with a very nice family tonight and it is time to sleep. Woke up to a strong and cold wind. Started to walk, but after an hour, it started to rain. I took refuge in a beacon tower that had a nice cave carved into it.

When I heard a mighty thunder clap, I decided to vacate the beacon tower. Since bad weather was on its way, I put up the tent in a lightning friendly place and crept in. The weather was bad until three o’clock. At that time the rain became lighter and the wind stopped.

I started walking, and kept warm by doing this. A little later, I saw a small village and considered whether to go there and ask for a shop or not. As I stood still in the rain, a rabbit ran towards me and was less than ten metres from me. I managed to get out the camera and took some pictures. 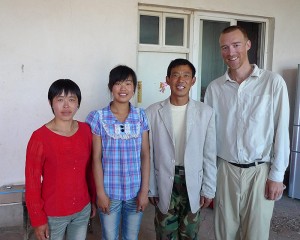 I went to the village, but there was no shop there. Instead, I was invited to eat with this family. We ate some very good noodles together. I showed them the pictures I have taken lately and pictures from Norway. When I got ready to leave, they insisted I spent the night with them. Looking out at the rain, it wasn’t hard to thank them for the nice offer.

They told me that both the scorpions and snakes in the area can be lethal. Nice to know that the winter is coming… Learnt the word for sleeping bag today! About time…

One thought on “Staying at a Chinese family’s home”

He who controls others may be powerful, but he who has mastered himself is mightier still.