The day started with a rice breakfast with the Chinese family who let me spend the night with them. I finally made friends with their dog too and petted it before leaving. I got the email address from the daughter in the family so that I can send them the pictures we took of the family. Yesterday, I learnt how to eat sunflower seeds really quickly with just one hand. So now I can pose as a true Chinese not only for eating with ease with chop sticks, but eating these seeds too. And let me tell you – they are really addictive!

Although it has not rained, there was plenty of moisture in the grass and scrubs so I got soaking wet within the first kilometre. That is no big problem though when you know that it’s going to be hot soon. It got up to about 30 degrees, but with a fairly strong wind, that was no problem.

I entered an area of the desert with a lot of sand and that made it harder to walk. Some places I was able to walk on top of the Great Wall, while other places the desert had swallowed it completely. 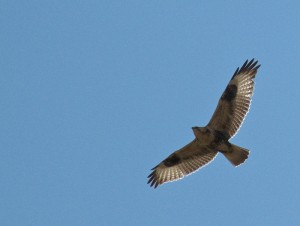 Taking a rest at a little before noon, a big predator bird swept over me as I was eating sunflower seeds. If I had had the camera ready it could have made for a great shot, but I was a little too late, and this was the picture I got.

I came to a large fortress that was placed where the Great Wall makes a 90 degree turn to the South. This must have been a place along the Great Wall where they could not expect reinforcements straight away, and therefore needed a fortress to defend themselves until help arrived.

In the afternoon I took a break to eat a watermelon just after I had climbed a peek and could see the town Yanchi below me. It was a nice sight as it promised me a shower and a place to eat food, but it was about ten kilometres away. After finishing the watermelon I noticed how much lighter the rucksack had become and set off on the last stretch of the day to Yanchi. 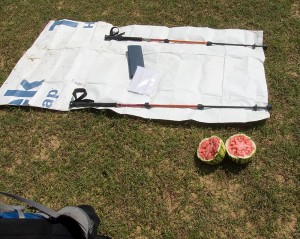 I was too tired to get out the tripod to get myself in the frame...

One thought on “Long windy day”

Dost thou love life? Then do not squander time, for that is the stuff life is made of.