After a good nights rest and breakfast from my hosts, I was ready to move on. Duan Cai Yan has done a lot of hiking and wanted to walk together with me the first section of the Great Wall east of Daankou. It was just as hot as the last 4-5 days, so we got off to an early start. Walking up the steep slope was hard and slow going. 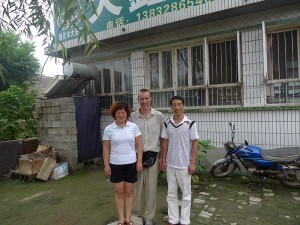 Duan Cai Yan and Wang Hao Zhen in front of their house and pharmacy. The brick structure to the left is the shower.

The Great Wall here is different from what I have seen before. It is about 4-6 metres high, and the width varies from 4-5 metres to less than two. The most fascinating thing was the local building materials that were used. Large yellow and gray rocks that were not necessarily square, with mortar in between. Unfortunately it was yet another misty day, so the view was not as spectacular as it could have been.

There was lots of vegetation on the Great Wall and around it. It took a long time to get past sections where the foliage was so thick that it was literally a step at a time. There were a lot of loose rocks and my walking stick saved me several times. It would have been easier without the rucksack with four litres of drink in it. After an hour of hard work, Duan Cai Yan bid me farewell and returned to Daankou. Thank you for the company Duan Cai Yan!

As I walked on, the bushes, foliage and undergrowth got thicker. Often, I had to use the walking stick to check the ground before stepping down as it was covered by plants. The ground was anything but flat, and I didn’t want a fall. There were plenty of thorns too. It got worse and worse as did the heat. After having cut myself several times trying to get through a section of dense bushes, I stopped for a rest. I had been on the go for more than two hours, but covered less than two kilometres. On average I was covering about 900 metres per hour. I knew it was going to get a lot hotter and found out that I didn’t want to go on walking through the thick foliage at this speed. Instead, I retreated down a slope, found a small path, and walked back to Daankou. From there I followed a dirt road just north of the Great Wall.

These last days have been pretty hard. The heat is the worst as it affects me more than I would like. Towards the end of today, I decided enough was enough and needed some rest.I was only about ten kilometres from Zunhua and was able to get a ride from a very nice woman I met just south of Shapo Yucun.

One thought on “Daankou Great Wall”

Correction does much, but encouragement does more.