The mist has set it’s mark on today. After walking a road for a few kilometres, I headed eastward along the Great Wall. The visibility was bad – at times less than a hundred metres. 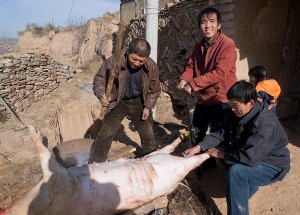 They inserted the end of the pump under the skin of the pig, and started pumping while whacking it with a stick.

I followed a large dirt road at first. It followed the track of the Great Wall that was clinging to the steep sides of cliffs. I passed a whole family working together to slaughter a big pig. The further up I climbed, the smaller the track became, but it still followed the remains of the Great Wall. Soon I was on a small path that ended up in a small valley. I continued, following the tracks of 2-3 sheep and one person. The I lost the tracks of the person and went on following the sheep tracks. Toward the end, they also disappeared and I found myself contemplating on the sanity of the fact that the only tracks I had left to follow were those of a pheasant on a frozen river. In the end I got to the top.

I tried to head in the right direction, but didn’t want to walk off the small track. Alone in zero degrees and poor visibility, I don’t want to end up in a maze of deep valleys without being able to see where I should go. This decision left me walking further north than I wanted, as you can see on the map.

Lying in the tent now, and it is cold. Looking forward to testing the sleeping bag properly! I also have two sleeping mattresses. Have boiled water and eaten noodles and will eat some biscuits and drink almost iced Ice Tea. I really hope the visibility will pick up tomorrow so I can get back on track.

What I repeated to myself a number of times as I got frustrated that all tracks went north and not east was: Rather walk two extra hours, and be safe, than … (fill in the blank)

Success is not the key to happiness. Happiness is the key to success. If you love what you are doing, you will be successful.