Walking the Great Wall of China would have been near to impossible if it had not been for all the help I received along the way from Chinese people. I know that in years to come when I look back on the experience, it will be the kind and helpful people I will remember the most. Being alone for such a long time is a tough experience, so to meet charitable people now and again makes it easier. 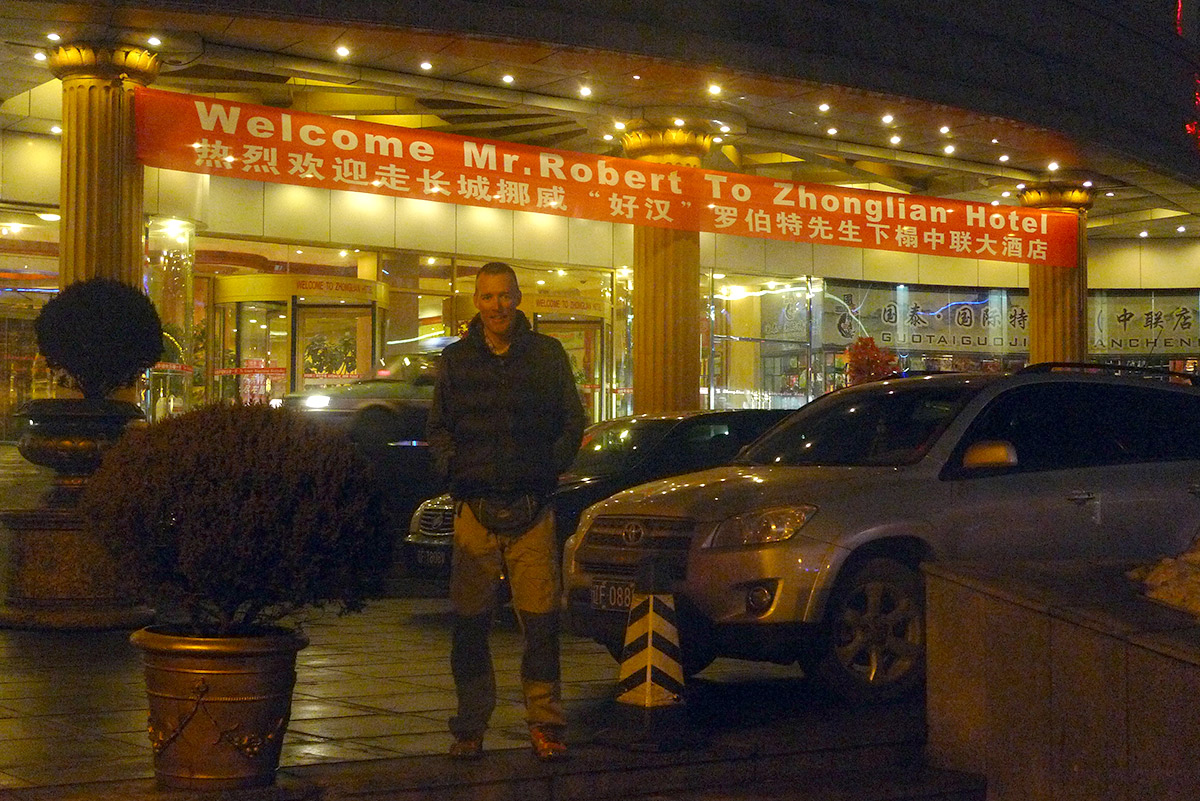 Picture taken on the evening of the day I finished my journey along the entire Ming Dynasty Great Wall. I was so grateful for the hospitality shown by the management of Zhonglian hotel!

I do not know the names of most of the people who helped me. The bus drivers that bought me a warm meal during the freezing winter of 2009, the people that many times let me into their homes at the warmest time of the day during the summer of 2009, perhaps asking if I wanted some watermelon before the heat resided and I walked on. People that went out of their way to help me find the right bus, or bus station when I was going from one place to another. The shepherds along the Great Wall that I used to stop and talk to.  Many days they would be the only people I met. All the shop owners who gave me hot water for my instant noodles and let me sit down in their shop for a little rest before walking on. Those that after hearing what I was doing would give me a meal for free. All those with a big smile who let me take pictures of them. The people that shared their Kang (warmed up bed) with me – I can’t count how many times I have been let into Chinese homes to spend the night there. The list is long!

Thanks again to my brother Jon and Kelly who are not Chinese, but have lived there for years, who helped me ease into a very different culture.

Thanks to Shelly of Jiayuguan, who my brother and I had contact with for a long time after the beginning of the walk, for helping us with practical matters.

Thanks to Sue who lives in Denmark but comes from Liaoning – the last Province I walked through – for helping me with the Chinese blog she has been running while I have been walking. Thanks for the help underway and for helping me communicate with all the Chinese that have been interested in the walk. When I return to China, I look forward to inviting friends in China for a walk along the Great Wall!

Many thanks to Helen who lives in Yulin in Shanxi Province. Thankyou for helping to translate when I had problems at the Visa office, for helping with the media in Yulin and then for taking on the large task of translating the blog from English to Chinese! I’m very grateful Helen! Also to Xiaoli who did the translation of the same site in the beginning.

Thanks to Vice-President Mr Dong of the Great Wall Society for welcoming me so nicely to China when I first arrived, and writing a letter of recommendation that helped me on occasions in sticky situations.

A big thanks to Pingping, Kelly, Xiao Zu and Beibei in Beijing for all the help underway with Visa’s, equipment, insurance etc – the list is long. Kelly – thanks for all the world problem solving talks we had while having hour long foot massages. They will be missed!

Thanks to Cherry in Datong, Sherry in Qinhuangdao, Frank in Xining and many others that I could and would call now and again if there was some Chinese I did not understand, and needed some translation help!

Lastly – a big thanks to Zhao Fu Qiang, Vivian and her friends at the Zhonglian International Hotel in Dandong. Vivian called me half a year before I arrived in Dandong inviting me to stay at their hotel once I got to my final destination. At that time, I did not know that they wanted to sponsor my entire stay in Dandong. Once I got there, I was shocked by your generosity. Thank you very much! Knowing that someone was waiting for me at the very end of the walk was a great incentive!