I spent a little time in the morning getting organized and repairing my rucksack again. I got the hip belt, which has loosened on the right side, attached properly The left side repair is still holding nicely, so it should last until I’m finished. The repair cost me 5 Yuan. That’s less than a dollar!

I was unlucky and had to wait a couple of hours for the bus to Xinglong. It left 2 o’clock, and they said it took about two hours on a normal day This turned out not to be a normal day.

After half an hour, the traffic came to a complete halt. When the trucks and busses stop the cars drive past on the opposite lane of the narrow road somehow magically expecting not to meet the oncoming traffic. When they do, then the real chaos starts… 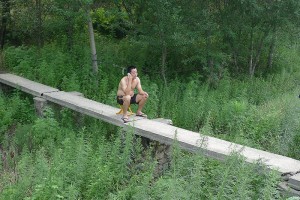 Every time the bus came to a halt, the bus driver took his little chair, ran out and found a place in the shade.

We ended up waiting about two hours over the two kilometres and another hour at 3-4 other narrow spots. So the two hour bus ride took five and a half hours and it was getting dark by the time we got to Xinglong. I have just got over diarrhoea and I am grateful that I waited one extra day before returning to the Great Wall. I would have had a terrible time if I had still had a bad tummy on that bus trip.

It wasn’t all bad news though. I was incredibly hot, so it would have been hard to get a lot of good walking done.

So: If you are planning to take a bus between Zunhua and Xinglong in Eastern Hebei any time soon, don’t be surprised if it takes a long time.

One thought on “Bus to Xinglong”