According to locals I have spoken to, it was 35C in the shade at the hottest part of the day. It is going to be about the same tomorrow.

I only took a small rest in the middle of the day sitting under some trees by a small river. After the rest I went on, and soon my body thermostat was working hard to keep me cool. I came to a tree and decided to spray more water on my head and the sun hat. The tree was in front of some houses, and soon there were some people around. Then a wonderful woman came with a large bowl of very cold water and said I could use it. I thanked her and was so grateful. Sprayed lots of water on all of my upper body Thank you 🙂 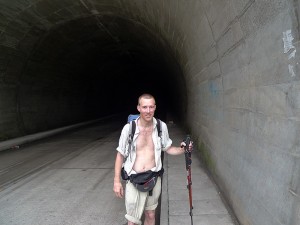 In front of the tunnel. You can barely see the headlamp in my left hand. I couldn't use it one my head as that was too far off the ground.

Today’s route went up a pretty high mountainside and down again. At the top there was a tunnel, and three lorries waiting in front of it. I spoke to the guys, asking how long the tunnel was. There was absolutely no lighting there, the walls and road were wet, and it looked VERY dark. If it was too long, I was planning to ask if they could take me through it with them.  After a little discussion, they said it was longer than a 100 metres. In my head, that means: longer than 100 metres, but not longer than 200 metres. (Otherwise, that is what they would have said)

They asked if I had a light, and I pulled out my faithful Petzl headlamp. Not exactly the right lamp for the job, but it was all I had. Then I said goodbye, asked then to crash in to me with a smile and headed into the tunnel. Just as I entered, one of the drivers gesticulated at the small sidewalk, and I thought he was suggesting that I walk there for my safety. Then he pointed to one of the tiles the sidewalk was made of, and pretended to throw it away. Great – I got the picture. Some of the tiles were missing, and the sidewalk was the worst place of all to walk.

I went in, and it soon got pitch pitch dark. The tunnel walls and road were very dark and wet so my ‘Three LED headlamp’ only showed what was immediately in front of my feet when I held it down at less than a two feet height. I’m not of the easily scared types, but this was so dark and creepy that I was expecting to fall through a hole any time.

There were not a lot of trucks passing by, but when they did, I hurried to the side, quickly lit the sidewalk at a foots distance and made sure there were three tiles in a row before stepping up to safety.

The tunnel went on and on. When I got out the other side, I measured it to be 900 metres long… 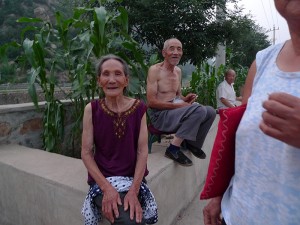 Then came a long and hard descent My feet and legs were pretty tired by the end of it. Once again it was almost dark when I saw the Great Wall again, creeping up a steep mountain side near Jiangjunguan. I asked a fantastically beautiful old lady if there was a guesthouse close by. As we were talking, two girls passed by, and one of them asked in English if she could help. She and her friend offered to take me to a guesthouse, which was very nice of them. As it turned out, the guesthouse was a fair distance south of the Great Wall. I was so tired when we got here, that I plonked down, and started stretching out my legs straight away so they will feel better tomorrow. Many thanks to the two girls! I was so tired when we got here that I forgot to ask their names!

Have eaten, taken a shower, and my clothes are being washed in a machine now. That’s great, because it means I can start completely fresh tomorrow.

Twenty years from now you will be more disappointed by the things you didn’t do than by the ones you did.