Not a drop of rain fell last night, but I was still happy having spent it with my friendly hosts. We ate breakfast together, and I was off at around 7.30.

Today was special in two ways.

It was the first time I walked a stretch that resembles what almost all Chinese and foreigners associate with “The Great Wall”. To me, pictures like the one below are almost branding the product “The Great Wall of China”, but not that many people know that the Great Wall is very varied in design, height, purpose, building materials, level of deterioration etc. 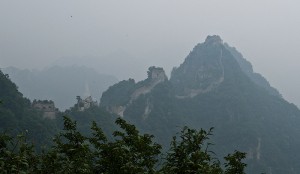 Section of the Great Wall to the West of Zhengbeilou.

I was also lucky enough to meet travellers Jenny from Sweden and Gary from the UK who are on an adventurous trip in Asia. They had made an attempt to reach the Great Wall at Zhengbeilou from the North, but ended up on a small path that led nowhere. They had spent time fighting through foliage in steep terrain. Reminds me of several experiences I have had lately. Together, we followed the track on my GPS, and got to Zhengbeilou and headed for Mutianyu. It is the first time since November last year that I have had company walking the Great Wall. Thanks Jenny and Gary for great company on The Wall!! Thanks also to the Great Wall Forum for making available the tracks in this area. 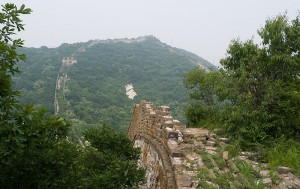 Great Wall stretch between Zhengbeilou and Mutianyu known as the Ox Horn.

When we got to the Great Wall, there was a wild and beautiful stretch to the West which is steep and dangerous. I thought The Wall looked fantastic and mysterious in the mist that was slowly getting thicker. Looking at the pictures, some of that allure has been lost due to the mist. The Great Wall between Zhengbeilou and Mutianyu is BIG. It is 4-5 metres wide, and between 4 and 8 metres high depending on how the surrounding landscape hugs it. We headed Eastwards and had a fantastic walk along the best preserved Great Wall I have encountered this far. It was steep here and there, but I thought getting past some of the watchtowers was a bigger  challenge. Sometimes there was a drop that would have been uncomfortable (but not dangerous) if it weren’t for the stones that were piled up. We took off our rucksacks and handed them to each other a couple of times. The joys of not walking alone hey?   🙂 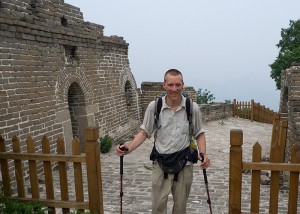 I was in for some strange experiences as we hit the touristy part. We were met by two ladies selling ice cold water. Where have they been hiding on my walk from Jiayuguan hey? What luxury. I didn’t buy any water though as I had three litres of Ice Tea in my rucksack. Then we started meeting tourists. One asked – how far is it to the end, and I was tempted to answer “About 4.000 kilometres mate”. 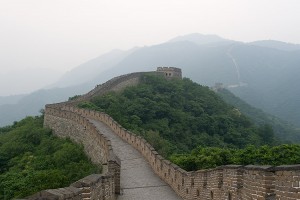 After a while, the original Great Wall was replaced by a reconstructed part that was easier to walk, but perhaps not as exciting as the original. If all the bushes had been removed on the original section, I think it could have been more spectacular.

A little notice about the weather in the Beijing and Hebei areas. From June to August thunderstorms often and quickly develop in the area. As you can see from these pictures the Great Wall mostly follows the highest ridges and is therefore the exact place you don’t want to be during a thunderstorm. Neither are the watchtowers. Sometimes, it can be hard to find a place to get down from the Great Wall and seek shelter. Last year, a newly wed Chinese couple were reportedly struck and killed by lightning in this area. 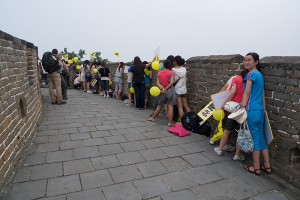 These girls formed the backstage for an artist launching his first album.

Getting closer to Mutianyu we heard someone speaking over a loadspeaker. We saw lots of young girls holding flags and small signs. It turned out that their teenage idol was launching his first album on the Great Wall, and the press conference was going on. The girls acted as decoration on the Great Wall behind the singer. I borrowed a sign and started waving it, but was soon told that the signs shouldn’t be waved but just held up. Boring.

Both my camera batteries were very close to empty at this stage, so I thought I might as well head for Huairou to get them charged. The tickets for the gondola going down from Mutianrou are designed so that the ticket inspectors first pull off the “Going up” part, and then the “Going down”. I wanted a return ticket from the top. The boss understood my dilemma and wrote on the back of the ticket, that I wanted the opposite deal as I want to keep walking from the place I left off.

As we got off the gondola and started heading for the road, we were ‘attacked’ by people wanting to sell us Great Wall merchandise. And of course one of the popular items was the T-shirt saying: “I climbed the Great Wall”. I was tempted to get one, but hey – I haven’t done it yet, so I will save it for later.

Pessimist: One who, when he has the choice of two evils, chooses both.