I forgot to write, but yesterday evening I had only two hundred grams of peanuts and a litre of Ice Tea left. That was it. I needed to get down from the mountain and hoped there would be a path as I had seen some stones from old settlements close to where I had camped.

This morning I started walking, and it was the same rush in the bush. Not paying too much attention to the direction I needed to go, I spent more time finding areas that were easier to get through, all the time looking both ways for any evidence of small animal tracks.

After a while I found a small path, and started following it. Sometimes it followed the bottom of a small trench in the ground with lots of dead leaves, so I had to be careful to find the place it left the trench. I hit my sticks on the ground in front of me often just to let the snakes know I was coming their way. Sometimes, the leaves would be 15-20 cm thick, and I didn’t fancy a snake climbing up the inside of my trousers…

Looking at the Google Earth map now, I am slightly disappointed at how flat the area I have been in the last couple of days looks. I am going to publish some pictures here to show you the descent I walked. It looks different on the pictures!

When I got down to a flatter area another slightly larger path appeared, crossing the one I had been following but heading for the steep edge of the mountain. The mountain’s edge had a high drop of more than a couple of hundred metres according to the topo map on my GPS, and it was steep!

The path went to the edge of the drop and I had some reservations when I saw it drop down in front of me. But from experience, these paths are usually well made and safe.

Following the path down was a fantastic experience! High mountain cliffs behind me and on both sides! The path was easy to walk – no danger. After a while, I was in the small town of Liubinbaoxiang. There’s a mouthful for those that don’t speak Chinese…

I waited for two hours to catch a bus that went to Huairou – my new base camp. The bus took two and a half hours to get there. Now I am going to take a couple of days off, sort out my visa and make more pictures and eat lots and lots of fattening food! 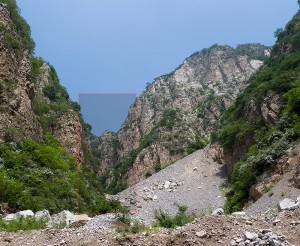 Looking back at the descent. The darker rectangle is where I came from. 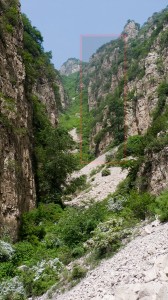 Higher up, looking back again. 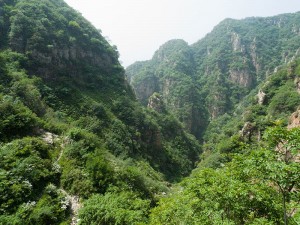 Looking down. You can see a little of the path in the lower left corner.

2 thoughts on “Down to safety”

You only live once, but if you do it right, once is enough.