I started after noon today, and took a dinner at Mutianyu before walking. After a very short time I met a happy bunch of young people from Guam. An island in the Pacific. They are in China to promote tourism to Guam but had taken the day off to see the Great Wall. 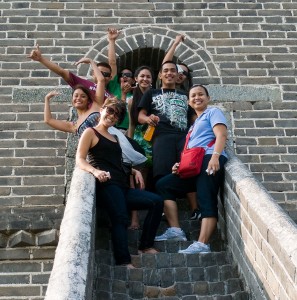 Thanks a lot for the company! You were so much fun to be together with Lots of funny and cheeky comments that I like 🙂
Good luck with your promotion work in China!

Later I met two women selling water I spoke to them for a while and when one of them understood what I was doing, she kindly gave me two bottles of freezing cold water – much appreciated.

The other one said it was dangerous to sleep on the Great Wall because of animals. I asked her what animals she was referring to and she gesticulated a scary animal by coming towards me roaring and then strangling me. Looked like a cross between a bear and tiger. I’ll take my chances!!

The Great Wall was fairly steep but no problem to walk. After a hot meal, I started an ascent to the spot I’m at now. Steep drop on both sides of a fairly narrow ridge. Walking up the ridge is OK so far apart from a couple of stretches where there are large rocks and cliffs.

About 50 metres to the north along the ridge, I could see a potentially dangerous stretch. It looks like one has to cling on to a vertical rock to get past it. A very high cliff if one falls. At this time it was getting dark, so I walked down to find a small patch big enough to set up the tent.

Will investigate the stretch in good light again tomorrow and make a decision.

Lots of mosquitos here now. Nice to hear the sound of them when I’m behind a mosquito net..