This post is for those especially interested in cameras. I love photography and therefore it is hard to keep it short when I describe the camera I use while walking the Great Wall.

I don’t carry an SLR while walking the Great Wall as it would be too heavy. I carry two smaller cameras. Although the Panasonic DMC-LX3 has a limited zoom range, I use it for the majority of the pictures I take.

The camera has a metal body that both feels and, more importantly, IS sturdy. My camera has hit the ground a couple of times without being damaged. It is slightly bigger and heavier than the average compact camera. 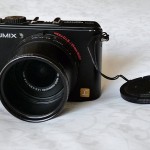 It has a fantastic Leica lens that is both sharp and bright at F2.0-F2.8. This means I can take pictures in dark places without having to use a too high ISO setting or a flash. Teamed up with the optical stabilizer and a sensor with a lower pixel density than most small cameras out there, the image quality is very good also in dark places.

I record most shots in RAW format and use post processing to adjust the colour temperature, brightness, contrast etc. This takes a bit of time, but gives better control and hopefully raises the overall quality of the pictures. 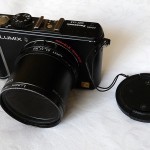 The camera is small enough that I can take it out from my beltpack and fire off a couple of photographs without drawing too much attention. And attention is guaranteed in rural China when taking pictures with a digital camera. My camera has a lens barrel mounted in order to keep dirt, sand and rain from entering the zoom mechanism. This makes the camera more bulky. It also gets in the way when taking pictures with the pop-up flash, which I very seldom use.

Speaking of zoom – this is probably one of the few areas where this camera doesn’t match others. It’s zoom range is from 24mm to 60mm (35mm equivalent) so you have to get close to the subjects you are photographing. But in my experience, the best pictures are not taken from across the street or field. They are taken at fairly close range.

I like this camera because it has plenty of dedicated physical buttons giving me direct control. I decide on which shooting mode, aspect ratio and focus mode I want to use before raising the camera to my eye drawing attention after a short while.

I use three shooting modes: Intelligent auto that records in jpg in case I don’t have too much space left on the memory card and the scene is not too challenging light-wise. The Program mode records a RAW image as does the Aperture mode where I have stopped down the aperture to a minimum for maximum depth of field.

I always carry two batteries. This is enough for a week or two along the Great Wall in the summer, all depending on how much I have been photographing. But in the coldest periods the batteries run out quicker, so I have to save the camera for the pictures I want the highest quality on.

One thought on “Camera – Panasonic DMC-LX3”

There is a great difference between knowing and understanding: you can know a lot about something and not really understand it.