Today I had a great day. Some time ago, I met Mr Liu Yanfei, his wife and charming daughter of 4 on the train from Beijing to Datong. He invited me to see his school when I came to Shenmu.

Mr Liu and his friend picked me up in the morning and we drove to the school. It lies just a little west of Shenmu and has more than 150 students. The students are deaf and use sign language to communicate. They live at the school. 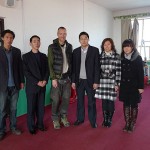 I got to see the dormitories, kitchen, gymnasium, classrooms and most important – to meet the students. They are between 6 and 16 years old. Seeing a foreigner raised a couple of eyebrows here and there. The students seemed very happy and were eating a good meal when I met them. The dormitories were nice and warm, and they even had a place to surf the internet. (I would have swapped any cold night in my tent with these students!)

I was told that music and dance are important activities at the school as the sudents can feel the music and rhythms and move to them. When meeting the students, I learnt how to say Ni hao, and my name in the sign language. This seemed to amuse the students. 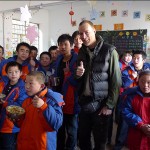 After this, I met the teachers of the school. I told them about the project I am currently undertaking. Luckily I managed to speak mostly in Chinese, and Mr Liu’s friend translated the rest. I was asked about the differences in China now, compared to 1998 when I was last here.

They are easy to see, I answered, and thought first of the school we were sitting at. Also the infrastructure in form of roads, electricity, mobile phone coverage and internet has greatly improved.  Then I went on by taking my clothes off, to show that many of the goods we use in the west are now produced in China. I stopped before things became too indecent though.

Thank you very much Mr Liu for showing me the school for the deaf in Shenmu! and whilst I am thanking you, I would also like to say thank you   for the rest of the day 🙂

We had a great dinner at a posh hotel that used to be frequented by one of China’s previous Foremen. Then we went to the Blade Monastery – Erlangshan – that overlooks the town. This monastery is built on the knife-like cliff to the west of the town. The oldest parts are from the Ming Dynasty! 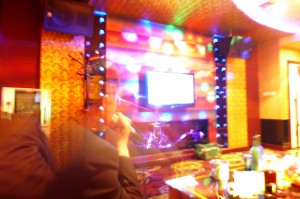 After that, we had another tasty meal before we ended the evening at a KTV / Kareoke bar. This was a first time experience for me, and really great fun. It was almost like having your own disco.

The only thing I have omitted from this report is the amount of wine and other drinks we had. I was introduced to the dice and drinking game men play at meals and parties and had the odds heavily against me. Also, it was popular to do the bottoms up routine, and since many toasts were directed towards me as the guest, I had the odds against me there too!

6 thoughts on “Visiting the school for the deaf in Shenmu”