All five of us fit comfortably on the Kang of the house. We got up at about eight o’clock. I was ready for an early start, but was offered breakfast with the family. I thanked them, not realising that I would be slightly delayed by a few hours. 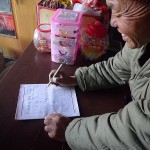 The grandfather writing the names of the villages I would pass.

The Grandfather of the house told me about an old dirt road I could follow that went right along the Great Wall. I took pictures of the family, that I will send to the grandson on QQ. Every youngster in China with respect for him or herself has a QQ account – the equivalent of Skype or MSN in most other places.

Many thanks for your great hospitality! I hope the slaughtering went well.

I walked the Great Wall following the dirt road. The terrain was hilly and following the Great Wall at close quarters would have been practically impossible. The wall was missing about two thirds of the way. It was mostly to be found on unreachable ‘islands’ of land that had not succumbed to earth erosion.

As the day went on, I walked away from the dirt raod to get closer to the Great Wall. This was fine, but a kilometre later I was angry at myself for doing it. I ended up using a lot of time and effort to find a way through the maze of small valleys. 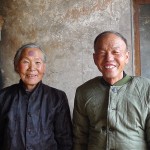 I was hoping to repeat the tactic of a few days ago and find a small guesthouse at a road I saw on my GPS. When I got there however, it turned out to be very small. Only one vehicle passed during short hour I waited, and it went the wrong way. I walked on a few hundred metres and found a nice spot high up on a hill. The light from the full moon made it easy to set up the tent. Because of the clear skies, I knew I was in for a cold night…

Being deeply loved by someone gives you strength, while loving someone deeply gives you courage.