Today’s goal was Xi Gou which means the Western Hook. As you can see on the map, today’s end point is at the western point of a ‘hook’ of the Great Wall.

The drinking game went on till about 1.30 a.m. this morning. The shouting got louder and louder towards the end of the session too, so no sleep until they were finished. We got up a little past 6.30 a.m. and ate breakfast with our hosts.

After taking some pictures, which we will send to them by mail, we bid farewell and continued walking the Great Wall. The first part of the day went quickly and after about 12 kilometres we took a long break to eat oatmeal porridge and catch up on our sleep.

The Great Wall was not as high as we have seen previously and not as wide either. We wondered if it had any definite defensive purpose, or if it was raised to ‘complete’ The Wall in this area.

It was and still is, warm and humid. It rained a little, but that served as a nice way of cooling down, a bit like manna from heaven. 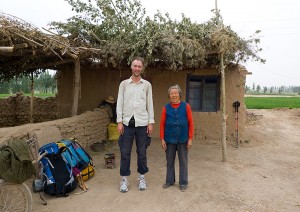 Later in the day we met a 70 year old lady tending her flock of sheep. She immediately invited us to eat in a nearby mud hut. She offered us some white bread and then went to a field close by and came back with some ‘lo bo’ vegetables. (a white leek like vegetable) She had four children, and one of her sons had studied economy at the University in Harbin.

We walked on, hoping to reach Xi Gou by the end of the day. When asking the locals where the place was, some vaguely pointed us onwards, while others told us how many kilometres remained. It turned out we reached the old part of town first, and the newer part was further on.

As we walked down a street diverting from the Great Wall, a woman stopped and simply asked if we wanted to stay at her place for the night. A very nice invitation and right now Jon is making some more oatmeal on her coal stove.

All the people we have met in old Xi Gou have been very nice. Usually a lot of people show up to ‘look at’ the foreigners and say their ‘hello’ and laugh. After we had bought some provisions at the local shop, the owner went outside and went on reading his newspaper. We enjoyed eating and drinking outside without ‘all’ the attention. 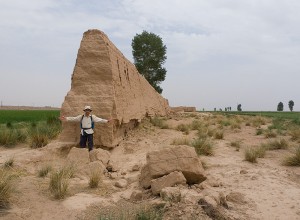 Jon showing the width of the wall in the area.

Today The Wall was in rather good condition. The Wall is about 4m high. Here there was/is not enough room for anyone to stand on top of it. It is a pure defensive and blocking structure, as opposed to sections where a soldier stands on the top and fires missiles outwards.

Distances can be deceptive. Before our regular midday rest, we decided to stop at a line of trees in the distance, in order to get out of the sun. I reckoned it would take 30 minutes to walk there. It actually took nearly 2 hours! We are not usually that bad at estimating, but this time we were caught out. The last 30 minutes my condition dropped fast, aching in my shoulders and little energy. Boy, was I glad to reach the trees! Human bodies are amazing really.  A good helping of porridge and 90 minutes resting on the ground did the trick and I was revitalized.

The first lady we stayed with had a good amiable and strong character. She could not read Chinese, probably due to her childhood being in troublesome times. She seems to have ensured that her children got a good education, despite her poor background. One of her sons studied finance at Harbin Uni in the north of China. Remarkable. She also mentioned that earlier this year a Chinese walker from China’s HeBei province had passed by The Wall.

The second lady we stayed with, actually passed us on her electric moped and in doing so, invited us in for food and the night. How nice is that! She is 55 and had just come back from tending her fields. She lived in a rickety mud house with a courtyard and had a good heart. She seemed happy despite life being hard. Her husband appears to have passed away. We did not want to cause upsets and did not ask further questions about this. She had pains in her shoulder, but had not been to the doctor. Due to her local accent, it was not easy to understand everything, but we still had a good time. Robert and I slept in a side room.

What about the landscape? It’s all flat where we walk. However a more or less continuous mountain ridge is on our northern side as we walk east. The Wall literally hugs the mountain base. The engineers have been real misers in this area, and have not left the ‘outsiders’/Mongolians any space for their own purpose. It all reminded me of the short story by Tolstoy “How much land does a man need?” .  It is about a Russian who moves east to their vast new territories and is promised land equivalent to the land he can encircle within a single day, walking on foot. He walks all day and the sun is hot . His greed leads him to include other lucios sidevalleys. When the sun goes down and he completes the circle, he has gained a lot of land,…… but alas, he is mortally tired and passes away of exhaustion. Oh dear…. Building The Wall, amazing as it is, must have had a large impact on the imperial budget. I cannot confirm whether or not it ever lead to financial collapse/difficulties.

(Robert is out walking now, whilst I am in a hotel in WuWei, so I have a bit of time for writing.)

Obstacles are those frightful things you see when you take your eyes off your goals.