I’ve added some pictures in the recent posts now. 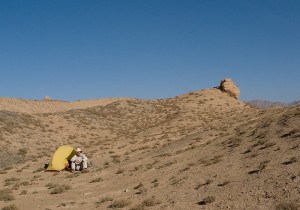 Blues skies when I woke up the day after

It rained for 2-3 hours during the night and the wind was pretty strong for the first hour. Luckily, I had time to set the tent up using all six tent plugs with rocks on top of them. After putting some plugs of the softer kind in my ears, I got some sleep. The MSR Hubba HP tent did well in the wind and now I know that as long as it is secured properly, it can take a beating.

Mission for the day: Get as far as possible along The Wall, but have enough time to get back to Zhangye, via my brother in Yong Chang, to have a nice long talk to my girlfriend. 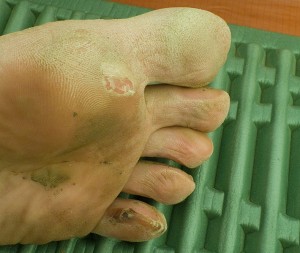 Walking the Great Wall is a breeze when the terrain is so beautiful and The Wall is in such good shape as it was on this stretch. Many places, the battlement (brystvern) was still intact which gave an extra feeling of the defensive purpose of The Wall. After about 10 km, I got to an orchard and sat down for a rest. I took off my shoes and what remains of the socks, to discover that the first batch of blisters are now starting to fall off, quite literally.

Later in the day, I got to a small village with a shop and bought Ice Tea, water and ate a noodles meal. Thinking that it was about time to get to Yong Chang, I asked the locals about the quickest way to get there.  They pointed straight over some mountains in front of me. I went on walking and saw a truck driving on a dirt road in the distance. Getting closer, I saw three men who were about to get into a very nice 4-wheel drive Mitsubishi car. I made a quick escape from where I was and walked faster, and just got to them before they set off. It turned out that they were going back to Yong Chang and they offered to drive me there – great luck   🙂

The road was terrible for the first ten km. I quickly understood that we wouldn’t have been able to get a taxi back to the place in Yong Chang. After a quick shower, Jon helped me get on the right bus to Zhangye. Two hours and a hazardous bus ride later, I was here. Enough time for a quick evening meal and a long talk with my girlfriend. Highlight of the week   🙂

And the added bonus: The parcel has arrived!!! Many thanks to my parents for sending it, and thanks to Odd at Løplabbet in Oslo for the extra socks that will come in handy the next couple of thousand kilometres.

Jon decided to come to Zhangye too and arrived a few hours ago.

Today and tomorrow: Rest days in Zhangye to fix things on the web site, rest, wash all clothes and eat loads of good food. We have been eating a bit too many noodles and biscuits lately, so it’s time to fatten ourselves up. Thanks for the chocolates mum and dad – they will come in handy.

The reason I decided not to stay in YongChang (means “Forever prosperous”), but to return to ZhangYe was simply that people were unpleasant! Their attitude towards foreigners seems endemic. After being outside walking around town for a while it a relief to return to the hotel. Even from a 30 or 40 metre distance, the locals felt they had an obligation to literally shout out insulting words. (“Laowai“, “he is ugly”, “he is too tall”). If this happens several times a minute, it gets on one’s nerves. One man sat peacefully eating his noodles alone. When he saw me, 30  metres away, he shouted “laowai“. Another guy spat in my direction as he walked past, no doubt about it. I was dumbfounded, otherwise I do not know what I would have done to him. When I walked into an internet bar, a female employee said in earnest to her colleague by the till, “higher price”. I let it pass. The next day when I came, even though she knew I understand a fair bit of Chinese, she repeated “higher price”. What can one do? I told her off and walked out.

Sorry guys, your town will be “forever poor”, and I have seldom seen the likes of such collective  behaviour.

Don’t get me wrong. YongChang is an exception. Most small places have a good or acceptable attitude towards foreigners.

One thought on “The parcel has arrived!”

If one advances confidently in the direction of his dreams, and endeavours to live the life which he has imagined he will meet with a success unexpected in common hours.