After an early noodles breakfast we got a taxi to where I left The Wall, to the north of Yong Chang. The trip was partly off-road and at one point we were sure water would come flooding in the car doors, as the water level was really high outside, but it went well. 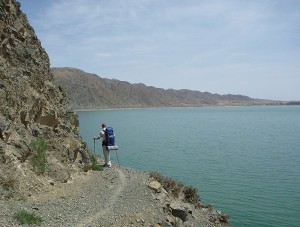 A fairly narrow path on the Northern side of the reservoir

We got to a large water reservoir and The Wall disappeared in front of us, into the water probably. We climbed the ridge to the north of the reservoir and followed a pretty narrow path eastwards. As we got closer to the other side, we saw motor boats cruising on the water. Another area had tourist attractions and a lot of Chinese people were enjoying their Sunday.

There were some tents, resembling the Tibetan Yurt tents that were part of a restaurant. We entered one, ordered food and slipped off our new shoes to relax. My parents sent size 45 and 45.5 shoes.  I’m using the bigger size and Jon is testing the others, as his shoes don’t have good cushioning in the heel. We waited close to an hour for the food, but the place was nice and we were resting anyway.

Then we started walking through a very narrow valley with high cliffs on each side. Our GPS lost satellite reception occasionally, as there wasn’t much sky to see at times. We saw a lot of people camping by a river for the day. It is the first time we have seen what Chinese do for recreation. Soon, a lot of cars were passing us as they drove home. Several cars stopped to ask if we wanted a lift, but we kindly had to refuse their offers. At times it can be difficult to explain why we want to continue walking along the road instead of getting a lift.

At the end of the day we had walked 25 km.  Two of them don’t count – where I was backtracking The Wall. We are now at a two star hotel with nice and helpful stewardesses and warm water in the taps. On the down side, the toilet either doesn’t fill up with water, or leaks, there are no towels here and outside there is a factory spewing out smoke.  But who cares – we have warm water and are ready for tomorrow!

I went by an Internet Café this evening and saw that the Daily Quote is missing. As soon as we get to Wuwei, we’ll get it up and running again. Speaking of quotes, if you have any inspiring quotes, please send them to: thegreatwallker@gmail.com and I’ll include them. Thanks!

Thanks also to my mother who has just finished going through this entire blog checking and correcting my English!

Success is not final, failure is not fatal: it is the courage to continue that counts.