We are back in Wuwei after a 31 km walk. I got a separate room so that I can chat with friends etc without disturbing Jon. I even got a room on the quiet side of the hotel. On the other side you can hear the constant beeping of the cars in the street just outside. The room is towards the quiet side. Or is it…?

Get this: There is a dog out there that has been barking CONSTANTLY the last two hours. Now that’s fine, but this is the part I just can’t get: Of all the 75 apartments pointing straight out at the barking dog, why isn’t there a SINGLE SOUL that gets as aggravated as I do because of the constant barking!?!? Is it the local mafia boss that owns the dog or something?

I got dressed to go down and personally take care of the issue, but just remembered that my door key card has run out, so I would have to use an additional 20 minutes at the reception to get it sorted out.

But what is it? Is the culture over here so dog-loving that it lets ONE dog ruin the evening of about 150 people? Or is it simply that they don’t mind? I’m paying that dog’s owner a visit tomorrow… He may not understand Norwegian, but I think he’ll get the general idea. Right now I have Dire Straits on the MP3 player and the volume is high enough to kill (hee hee) the dog barks. I’m slowly going crazy…

Back to the walk. Today’s walk got us down to where the Great Wall re-appears after the reservoir, which I walked around earlier. We stopped just by a bridge and with Jon’s binoculars, we could see both The Wall and Watchtowers in the distance. 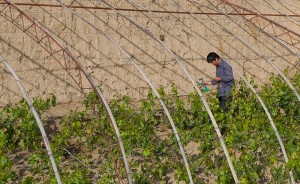 A farmer tending his grape vines.

It was very warm today and we drank a lot more than previous days. Luckily we got to a shop towards the end of the day. We tried to avoid the road as much as possible.  This led to the most exciting event today. As we walked in the terrain, we got to an area that was surrounded by barbed wire. This is not unusual, so we got over it, and Jon walked to the other side. But about half way we heard a big crunch, and Jon basically disappeared in the ground! He stopped at about waist level and I helped him crawl out again. We were both pretty shocked, but luckily Jon was not hurt. It looked like a dike, that went under the road, had been covered with branches and leaves. We continued along the road for a while after that…

2 thoughts on “I think the culture shock has finally come…”