Today has been one of those days where things just fell nicely in place. Right now I am in the desert just north of an agricultural area. Jon has decided to stay in Wuwei for a few days and we will meet up on the eastern side of the ‘hook’ we mentioned yesterday.

I got off to a late start and learnt I would have to wait two whole hours for the next bus which would drop me off three kilometres from the last point. So instead I called the same taxi driver we had two days ago and he agreed to drive me to Xi Go. He is a safe driver and I can understand some of the things he says in Chinese!

The first kilometres today went through farmland, but luckily I managed to keep track of The Wall. This is not so easy because it has been levelled to the ground some places and if it changes direction here, it is difficult to track.  After a while, that is exactly what happened but I followed the general direction. Soon I started going westwards to find it, but without much luck. Then I met a farmer and he pointed even further west to what seemed to be an insignificant heap of gravel and said: Chang Cheng – The Great Wall. I followed it but was sceptical. Then I came to a place where locals had extracted the gravel and could see the characteristic sides of the walls of the ehhh… Wall 🙂 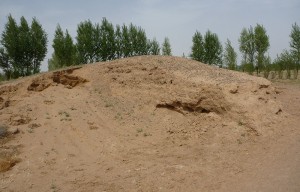 The Wall under sand and stones

Over hundreds of years, it has been almost completely covered by small grained gravel which has conserved it, in a sense.

I managed to keep a good pace, much thanks to the new jogging shoes. Took a proper break, and then went on. Toward the end of the day, I met a shepherd and although we didn’t understand each other very much, we had a good talk and many smiles. He kindly said I could follow him home for food and water, but he pointed in the direction from where I had come, so I politely said no. He enjoyed seeing himself on the back of the digital camera. 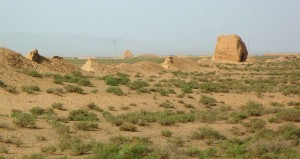 The Wall was not as grand here, but as the sun started setting, the light played beautifully on the remains of the Great Wall. Several times, I considered making a detour to stock up on water. Luckily I waited till close to the end of the walk when I asked a guy if there was a shop close by. He pointed me in the direction of a small village. I started walking towards it, but soon the same guy drove up to me on his MC and asked me to hop on.

He drove me to the front door of the shop. A crowd of about ten locals came in the shop to see who I was. I told them about the walk and that although I can speak some Chinese, my understanding is pretty poor. I bought 2.5 litres of water and a noodles packet that I ate for dinner. Instead of hanging around answering ‘Sorry mate – I can’t understand you’ (Ting bu dong in Chinese) I sat down beside a bunch of guys playing Chinese chess. It would be fun to learn the basics of the game while I am here. Knew the basics back in 2001 after four months of Tai Chi in Borneo, but it’s gone now.

When I left the village, one of the guys warned me that there were wild dogs in the desert. But looks like they are not making much of a fuss tonight…

So I’m alone here now and it is SO quiet! Not in a scary way, but peaceful.

When I got here, the sun had already gone down and there was only half an hour left of light. I went to the Great Wall and placed the SPOT satellite transmitter at a slightly southern angle and then activated the ‘OK’ sequence which is the one that will show up on the map tomorrow morning. Then I set up the tent and got things ready for the night. I noticed something slighty larger than a mouse running around, so have closed all the pockets of the rucksack. When I went to the SPOT device, it had just finished sending the third positional message. (for redundancy)

The weather has been great today. Slightly overcast, a little breeze and a little above 20 degrees C. Even though I didn’t start walking the Great Wall before 2 p.m., I’ve covered 25 kilometres, in addition to two off route (and one on the back of the motorcycle) to get to the shop.

Finally a note to the geeks and nerds following this site: This website got a Google Pagerank of three this morning. I’m really happy about it, because it took longer than expected.

One thought on “All systems functioning”

Faith is taking the first step, even when you don’t see the whole staircase.